Welcome to Point of Care at Stucki Pharmacy!

Point-of-Care services enable us to conduct influenza (flu), strep, cholesterol and glucose tests here in the Pharmacy. Now instead of spending hours in the doctor’s office you can be tested and receive the results within minutes!

Your test results will be discussed with you by our pharmacist. When appropriate, we can provide prescription medications through our point of care providers to treat Strep or Flu at the time of your test. We work closely with your primary care providers to provide comprehensive care.

These Point-of Care services are Cash Only services and are less expensive than most Insurance Co-Pays! Contact us for more information and pricing! 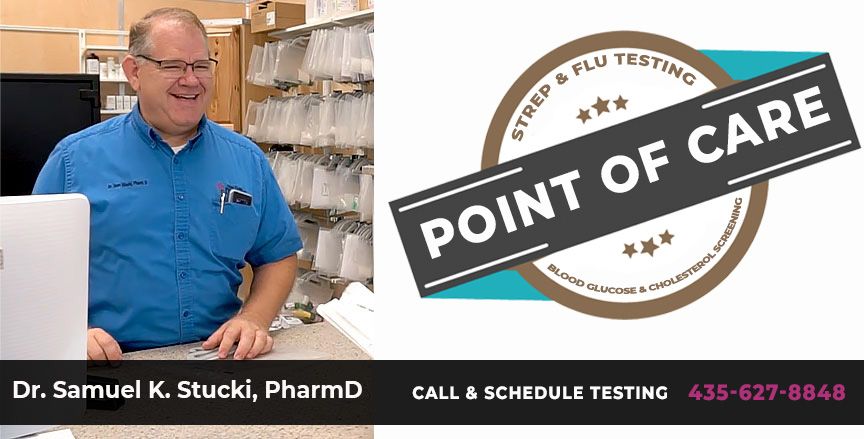 WHY GET TESTED OR SCREENED?

In the early stages of flu, many people do not realize they are infected. Without knowing it, they risk exposing their families and co-workers to the disease. Studies show that most healthy adults can infect others with the flu up to one day before they start having symptoms and can infect others for up to five days after becoming sick. With millions of cases reported each year, treatment for flu with antiviral drugs is most effective in reducing flu symptoms if used within the first 48 hours.

Also, chronic diseases and health conditions including heart disease, type 2 diabetes, and obesity have a direct influence on population health. They are some of the most common and also preventable health conditions, but some people are not aware that they are affected. According to the Centers for Disease Control and Prevention, of 30.3 million people who have diabetes in the United States, only 23.1 million people are diagnosed, while 7.2 million are undiagnosed. 95 million adults age 20 or older have total cholesterol levels greater than 200 mg/dL, and 29 million of those adults have levels greater than 240 mg/dL. Recently, the parameters for blood pressure measurement changed, which led to about 14% more people diagnosed with high blood pressure. These health risks can be assessed by point-of-care screenings.